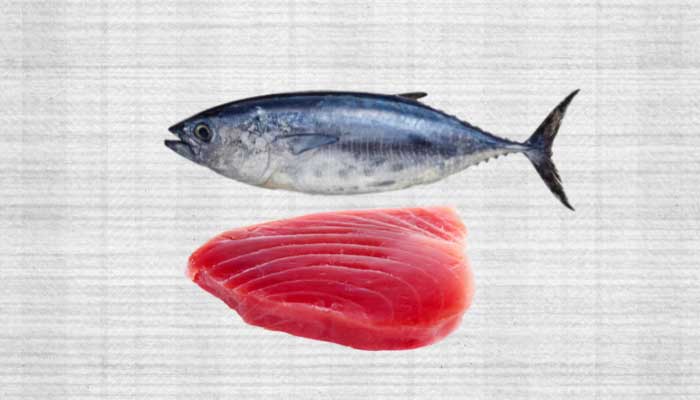 We all know fish as human food, but the predatory nature of tuna makes one wonder what does tuna taste like. Whereas most fish, if not all, have a typical taste- fishy taste and odor, there are some key distinguishing factors.

In this article, I shall go over the taste of tunas in general, covering the species I’ve had an encounter within my kitchen, as well as those that I prefer eating at the restaurant. Either way, you will be fully informed, so you have a clear expectation of the taste of these fish before you spend your hard-earned cash on them.

Hang in tight, for I shall share a unique way of making fresh and canned tuna taste great.

Generally, tuna has a different taste profile when raw and when cooked. Raw tuna will mostly have a mild and tender taste, infused in the oily texture, reminiscent of typical fish. If you are an adept fish lover, this taste will appeal more in fresh tuna than in the canned types.

As you may already know, the taste of the tuna will vary depending on how it’s prepared. The common types of tuna you will come across are canned, poached, seared, and raw tuna. Each of these has a different characteristic taste.

If you choose to sear or have your tuna raw, expect a tender, mild and oily taste. However, you must be careful when cooking or searing the tuna as it loses its flavor when overcooked- which can happen within a few seconds.

On the other hand, cooked tuna has a little bit of its flavor intact but not as pronounced as it is in partially seared tunas. Again, you must avoid overcooking this delicacy if you care about the taste.

Before we get to how ahi tuna tastes, I insist that you avoid overcooking this meat to retain its tuna appeal. The way you cook the fish constitutes the taste profile.

Pan-seared tuna (usually raw on the inside) will have the tuna’s tender and oily texture, with a mild taste. If you let the ahi tuna on the pan for too long, you lose all the tasty goodness and remain with fishy-tasting, cardboard-textured meat.

The cooking method and the seasoning you use will also contribute to the final taste of your ahi tuna. You may also find the taste different (or more appealing) depending on the meal you choose to serve along.

Bluefin tuna differentiates from the other types of tuna by its color and fat content. It is the darkest in appearance and still the fattiest of all the known and consumable tuna species.

When cooked, Bluefin tuna develops a medium-full flavor, while its texture turns firm and feels meatier in the mouth. Since the tuna flakes will typically be bigger than chunks of beef, you will likely feel like larger flakes of meat in the mouth.

For the best taste of Bluefin tuna, cook between rare to medium-rare, and serve alongside sushi.

Again, if you overcook Bluefin tuna, you will have chewy meat that tastes like dog food.

Yellowfin tuna lies somewhere between the Bluefin and albacore tuna. Yellowfin is tastier than albacore but contains lesser fat than Bluefin tuna. It is the reduced fat content that gives this tuna variant a bright red appearance when raw.

Cooked yellowfin tuna develops a mild and meaty flavor while its texture becomes firm and moist. Also, the color will change from bright red when raw to grayish-tan when cooked.

Just like Bluefin tuna, yellowfin pairs best with sushi. It can also be served as raw sashimi, but the final results mainly depend on the nature of the tuna before cooking. For example, if you want a more robust flavor, go for tuna with more fat. Other than that, the best yellowfin tuna will look wet and glistering, while the depth of color is translucent red.

We all love to fish, but the strong odor makes some of us think twice before indulging. If you are such a person, but your taste buds always scream for tuna, albacore tuna should be your go-to option.

This tuna has a color profile ranging from white to light pink. It is also the only white tuna species.

This variant has the mildest flavor and the highest proportion of flesh against fat. This flavor and texture (firm) can be compared to baked chicken breast.

Albacore tuna is, therefore, suitable for even children and lactating mothers. For this reason, it is also the most expensive type of tuna.

Albacore tuna has one negative aspect- it has a high mercury level.

Skipjack tuna is the most typical type of canned tuna. If you enter any store that sells canned tuna, there’s over 70%chance that it will be skipjack tuna.

Skipjack tuna is known for its strong taste that is more fishy than mild. Even though these fish are among the smallest in the tuna family, they are among the fattiest.

People who have not had tunas before should not begin their journey with the skipjack. If you are new to tuna, skipjack may make you hate everything tuna.

Sometimes, you may be lucky to find fresh tuna nearby. If you are used to canning fish, you will be surprised by fresh tuna’s mild and tender flavor, with an oily texture that’s hard to resist. This delicate flavor is very perceivable but does not feel harsh or overwhelming.

Tuna is best consumed fresh when the taste and texture are most consistent throughout the food.

Compared to other types of fish, the taste of tuna closely resembles that of salmon. However, salmon’s flavor tends more towards halibut, with its buttery texture, while tuna is firmer.

There are more than five types of tuna you can enjoy at home or at the restaurant today. However, not all species taste the same- some are savory, others are terrible.

We can only judge the best-tasting tuna species by first considering the components of flavor. Just like beef and other types of meat, the higher the fat content, the more flavorful the meat becomes once cooked.

Bluefin tuna has the highest fat content among the notable species of tuna. For this reason, we can comfortably crown Bluefin tuna as the best-tasting tuna species.

The taste of tuna, like every other meal, is subject to the eater or taster. Some people are put off by high-fat content, making them prejudiced before they even taste the meat. Others may already have a fixated mind about the taste of a certain kind of tuna, while others still don’t perceive the tastes so well.

So, why do I say Bluefin tunas are the best tasting? Despite the high-fat content, the Bluefin contains enough proteins o perfectly blend with the fat. The result is a perfect balance that makes the flakes feel like they can melt in your mouth! That’s something you won’t experience with any other tuna species.

How to Make Tuna Taste Good

Tuna is known to have a strong fishy taste and smell, which can be too much for some people. To tone down this smell and flavor, do the following two things:

First, there is this hype of using mayo or Greek yogurt. People often swap mayo with Greek yogurt when making salads, but it turns out the latter is more effective. Changing the mayo for mustard and then mixing it with the yogurt makes your tuna taste heavenly.

Ever wondered why so many tuna recipes include lemon? It’s for a good reason- same as yours—to suppress the fishy smell and taste. When preparing tuna at home, ensure you have half a lemon to squeeze over the tuna. You can also squeeze the lemon over the ready meal, if permissible?

The process of canning tuna kills the flavor but retains the nutritional value. If all you can get is a tuna in a can, there are ways to breathe some life into that dish. They include:

As unlikely as it may sound, adding sugar to dishes enhances certain flavors and suppresses others. Canned tuna is notoriously ‘fishy,’ but sugar suppresses the smell with ease and simplicity. The sweet sugar taste overwhelms the smell by enhancing the overall flavor. This way, your taste buds will be far too engaged to let your smell receptors report otherwise.

When prepping tuna at home, combine mustard and Greek yogurt and use it in the place of mayo when preparing your tunas. You can then liven up the tuna with such spices as sriracha and pepper.

Q. How to remove the fishy taste from canned tuna?

You can also cook with ingredients like mustard and Greek yogurt. Spices like peppers and sriracha will also help make the fishy taste unnoticeable.

It can be confusing to even imagine if this is an issue, but tuna hearts are eaten more as part of certain traditions than nutrition. The taste of these hearts is not at all pleasant. It’s like the taste of raw, bloody liver.

Tuna hearts are traditionally eaten by a person who catches their first tuna. This is according to an ancient tradition whose origin is not explicitly understood.

Ahi tuna is characterized by a predominantly mild taste coupled with a tender and oily texture.  However, the delicate mild flavor is subject to the cooking method and time. If fully cooked, the tuna loses its appeal and leaves cat food-tasting junk.

Yellowfin tuna is known for its mild flavor that tends to be relatively meaty. The flavor is accompanied by a firm, moist texture. It also tastes ‘lean’ due to the reduced fat content.

Tuna steak comprises thick blocks of teak cut from the tuna’s back. While this meat is essentially fish, it bears some resemblance to beef steak. Tuna steak has a taste profile closely resembling that of young beef.

It is tender and not full of fishy smell or taste. Instead, it is oilier than young tender beef and is also saltier and buttery. This means one thing—it’s far delicious than ordinary cow beef. You would never leave tuna steak for beef steak.

At this point, if you had uncertainties regarding what tuna tastes like, you can firmly decide whether to go the tuna way. You also know the different types of tuna, and how they taste, so you can even opt for a given species over another.

Found this interesting? Share the love with your friends and family.