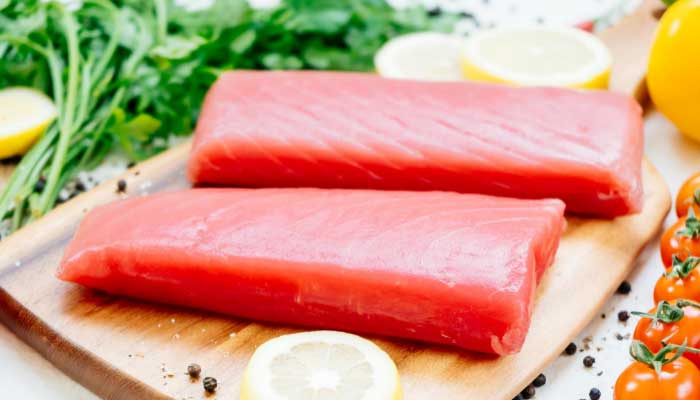 So you are hosting your friends for dinner, and you grabbed some tuna from the nearest store. But then there are vegetarians in the picture. So you there wondering, can vegetarians eat tuna? Well, it depends on the type of vegetarian one is.

As a vegetarian, their rule is that no consumption of meat or fish. So ideally, consuming tuna is a no-no for vegetarians. However, pescatarians vegetarians follow the vegan diet, so they don’t eat meat but consume seafood and fish. Lacto-ovo-vegetarians, on the other hand, consume milk and eggs and can consume seafood as it’s not meat from land animals.

So in this article, I will explain further whether vegetarians can eat tuna or not. Keep reading!

What is Vegan Tuna?

Vegan tuna is nothing close to tuna or fish. It is plant-based, usually made with chickpeas, and a perfect vegan alternative for regular tuna fish. This vegan tuna has a fishy characteristic due to its nori flakes, which are low in fat, making it a healthy addition to your dishes. Even though this vegan tuna is high in protein, it does not have any real tuna in it.

However, the flavor and deliciousness of vegan tuna are close to that of real tuna. The vegan tuna contrasts the texture of the vegan tuna and the real tuna since both are nowhere close to each other. Its best served as a dip or added in sandwiches and salads.

You can comfortably make some homemade vegan tuna in your kitchen. It’s a super simple process that you will love.

What you will need:

There are several vegetarian tuna alternatives that pescatarian vegetarians can have. These substitutes are plant-based and safe for the vegan and vegetarian diet.

Loma Linda Tuno is an excellent tuna alternative made from soy protein that gives it its texture and seaweed that adds a fishy flavor. Loma Linda Tuno products are gluten-free, vegan, and vegetarian friendly.

The Loma Linda Tuno makes both packed packets and canned alike. Tuna packaged in containers, on the other hand, comes in sesame ginger, lemon pepper, and Thai sweet chili flavors.

Good Catch makes their seafood by combining several ingredients. These include legumes that constitute the texture and the protein content, infused in algae oil, which then adds the seafood taste to the generic tuna. Also, algae oil is a rich source of omega-3 fatty acids.

Apart from these ingredients, Good Catch combines the different components to achieve different tuna flavors. Presently, they have three vegan tuna flavors. The most common of the three is Naked in Water, while the other two (the Mediterranean and Oil & Herbs) are lesser-known.

Whether you are a vegetarian or vegan or simply dieting and trying to avoid gluten, these three options guarantee you a taste of tuna while sticking to your dietary principles.

This is another brand that allows you to enjoy a range of seafood while sticking to your vegetarian/vegan diet. They have plant-based tuna, salmon, shrimp, and fish fillets. As if that is not enough, they have gone a step ahead to make a vegetarian crab cake, letting you enjoy the taste and flavor of crabs while sticking to vegetarianism/veganism.

When making the tuna (they call it Toona), Sophie’s Kitchen uses pea for the starch and protein. Starch helps with the texture, while the protein matches up the protein present in live tuna. For the ocean flavor, they use some seaweed powder and avoid using any GMO product in the entire process.

This brand has come up with two flavors for their vegan tuna: Sea Salt and Black Pepper. Toona comes canned.

This product by Ocean Hugger Foods may not be very distinguishable from real tuna flesh. Ahimi tuna is made from tomatoes and is so close to tuna in taste and texture that it can be used for sushi! Furthermore, expectant and breastfeeding mothers do not have to worry about sea tuna’s high mercury levels.

You don’t have to depend on the above products to substitute your tuna. You could work this around at home and end up with tasty vegetarian tuna, most of which is really easy to make.

One way to get things done at home is to slightly squeeze jicama and add some chopped sunflower seeds into it. The resulting texture closely mimics tuna, and you can spice things up by adding onions and mayo to give the meal some extra oomph.

Chickpea of the Sea

Chickpea of the Sea is another great recipe that can step into the place of tuna salad for a vegetarian. Chickpea gives the same taste and consistency as tuna, plus it tastes really great. Depending on the spices and other ingredients you may opt for, you can easily manipulate this recipe to your liking.

Ever imagined jackfruit could substitute tuna and still give the same great tuna taste and texture? If so, then you are a genius! This is a great recipe to try if you run out of chickpeas.

Turns out that you can make vegan tuna collard wraps from a blend of sunflower seeds and dulse, a seaweed. Apart from being vegan, this ‘tuna’ is packed full of proteins, zinc, and enzymes that aid digestion, all without sacrificing the taste.

Q. Is tuna bad for vegans?

In general terms, a vegan avoids eating the meat of all animals. This would make tuna, which is an animal, bed for vegans.

The main reason vegans avoid meat is that it involves killing the animal to consume its meat.  However, there is a faction of vegans known as pescatarians. This group of vegans avoid meat and poultry but eats seafood, including shrimps, crabs, fish, and other edible organisms.

Pescatarians consume fish, including tuna. This makes tuna not bad for pescatarian vegans but for the rest of the vegans.

Pescatarians are the vegans who eat seafood but avoid meat from animals and birds. The ‘allowed’ seafood includes fish and crustaceans such as crabs and prawns. Since tuna is one of the thousands of fish species, it is a pescatarian’s meal.

Tuna salad is made from tuna meat, combined with other ingredients. This makes the salad non-vegetarian friendly.

Vegetarians can eat a vegan tuna salad, which typically consists of vegan tuna alternatives, in the place of the sea tuna. If you are having tuna meat at the restaurant, it’s best to be specific on the type of tuna salad you want.

Technically speaking, meat is the consumable flesh of an animal. Fish are animals, alongside other living things like mammals, birds, etc. By this definition, tuna fish would definitely be considered meat.

This is the proper definition for a vegetarian, which leads to them(vegetarians) avoiding tuna altogether. For you to eat tuna flesh, the animal (tuna in this case) must be killed. This is precisely what vegetarians try to avoid by keeping off all meat from animals, including seafood.

In other terms, such as religion-wise, don’t classify fish as meat. These religions include Catholicism, Hinduism, and Judaism. On these grounds, tuna fish may not be considered meat.

Q. What fish can you eat as a vegetarian?

Vegetarians avoid meats entirely. This means if you are a vegetarian, you cannot have any type of fish.

On the contrary, a particular type of vegans, pescatarians, eat seafood, including fishes like tuna and crustaceans like crabs and shrimps.

If you are a vegetarian, you now know what your options are regarding eating tuna. Even though you may not have tuna fish, there are more than a couple of ways to enjoy the same great taste and texture in vegan options. Have you got a lesser-known vegan tuna alternative? Please let us know in the comments section.