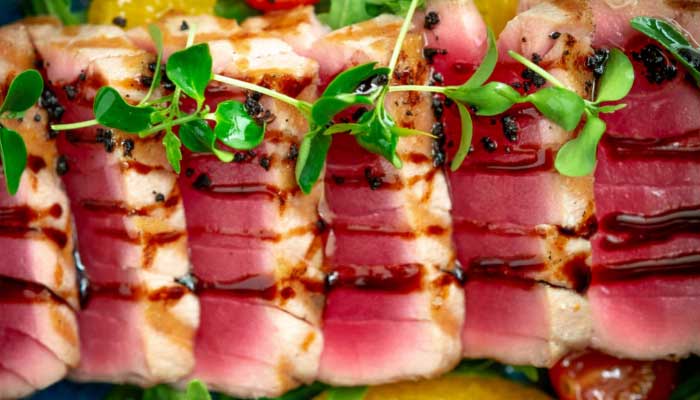 Tuna is one of the best protein sources that you can include occasionally in your diet. But can someone eat it every day? Well, it’s a question that has been plaguing many tuna lovers. The answer is no; you should know some essential things before eating tuna.

Tunas have many health benefits, but they are associated with weight gain and getting traces of mercury on a negative account.

Nearly all marine animals contain mercury, but many food nutritionists don’t know what levels it becomes poisonous to human bodies. Mercury can lead to certain negative health issues, including:

It is vital for human adults should eat tuna in moderation.

How Much is Too Much Tuna

Whereas tuna and other kinds of seafood are rich in nutrients, low in fat content, and high in proteins, one may worry, how much should I consume?

Generally, this is because people are more concerned that their bodies cholesterol levels and blood pressure will rise when they consume tuna daily. Whereas this can be true, the benefits of consuming tunas outweigh the risks associated with them.

The recommended amount one should eat is 2 servings (12 ounces) in low mercury tuna fish per week. To consume tuna with high levels of mercury such as albacore, bigeye, and ahi tuna should be one serving a week. Amazingly if you are a fish fan, you can stick to other fish species and have more than you can think.

What Happens if You Eat Too Much Tuna?

Overeating tuna makes one susceptible to high mercury levels. Mercury is a neurotoxic element and may result in the following problems in human bodies.

Pregnant women and young children are more susceptible to fish with mercury than other adults. Therefore, the general recommendation for such people is to have small uptakes of both cooked and canned tuna.

Large predators like ahi tuna, bigeye, and albacore have a very high mercury concentration since they feed on other small fish. Feeding on such fish increases your mercury exposure.

How Much Tuna Can You Eat in a Week?

Fish are essentially rich in vital nutrients and proteins, which are suitable for our health. Some of the benefits associated with eating tuna includes.

One may encounter the following types of tuna. Each of these has a different weekly recommendation.

It is low in mercury which is estimated at 0.12 parts per million. Mature men and women can eat 14.5 and 12.5 ounces of light tuna per week, respectively. Pregnant women are advised not to consume tuna until after the weaning period.

Tuna steaks have the highest omega 3 contents. They are also high in mercury content. The average recommendation to adult men and women is 6 ounces per week.

They are low in mercury content. The amount of mercury is similar to that of light tuna. Recommended weekly uptake is 14.5 ounces.

It has the same mercury concentration as the albacore tuna. People should limit their weekly consumption to 5 ounces.

In conclusion, consider the concentration of mercury before deciding on which type of tuna to eat.

How Much is Canned Tuna Safe to Eat Per Week?

Canned tuna provides the same benefits as fresh tuna. Some of the benefits include low calories, vital minerals, and essential proteins. One should consist of it in diet, but the big question is the safest canned tuna to eat and serving sizes?

It is one of the most canned fish types. If you visit any fish shop that sells canned fish, chances are high you will be skipjack tuna. Other names of skipjack tuna are chunk light or flaked tuna.

The recommended average consumption of skipjack tuna is 2 to 3 servings a week.

That number applies to pregnant women as well as little kids.

It is the only white tuna species available. It tastes mild with a flavor fresher than oil. Breastfeeding mothers and young kids should have a regular intake of albacore tuna.

Tuna is popular marine seafood that has got many benefits. Here is a list.

Tuna contains omega 3 fatty acids, which reduce cholesterol levels in blood capillaries. As a result, the heart can pump blood to all the body tissues.

Tunas contains various minerals such as potassium and selenium, which studies have shown bring an anti-inflammatory effect to the heart hence lowering blood pressure.

Tunas are rich in nutrients and minerals such as zinc and manganese that improve one’s immune system. Good immunity helps our bodies fight diseases caused by micro-organisms.

Tuna are low in calories since their fat contents are low. Therefore, the problem of weight gain is far much reduced.

Tunas are rich in vitamin B which makes our bones strong and protects them from fracture.

Vitamin B complex helps to keep our skin healthy. It also gives one smooth and radiant skin.

Research has shown that some of the antioxidants found in tuna meat help the body fight cancer cells. They also help to fight kidney cancer.

When we consume tuna, it provides us with energy to do our daily activities.

The omega 3s fatty acids in tuna contribute to the health of the retina in the eye, which involves one’s vision.

Eating tuna lowers the risk of stroke through the prevention of blood clots.

Some of the side effects of consuming tunas include,

Tuna fish contains some portions of mercury. Mercury may cause mental and body coordination problems.

Pregnant women ingesting too much mercury can also be dangerous to their unborn babies’ brain development.

Large predators such as albacore feed on small fish. The results are that they become contaminated with heavy metals after consuming them. These heavy metals can result in ina heart attack.

Tunas are allergic to some people. Scombrotoxin is a toxic bacterium that results from improper handling of tuna that has begun to spoil. Exposure to this bacterium results in body allergies that include sweating, dizziness, and a bad taste in your mouth after eating tuna.

Consuming a lot of tuna with a high sodium concentration raises your risk of high blood pressure.

Why is Tuna Bad For You

Exposure to high mercury levels damages the brain and the nervous system of unborn infants. Pregnant women eating a lot of tuna fish that is high in mercury concentration give birth to infants with growth challenges,

Tunas have got many nutrients, such as selenium. Selenium protects the chemical compound known as elastin in the skin. The compound helps to keep the skin smooth, soft, and lovely.

Yes, canned tuna is edible while still, it is raw. Canned tuna comes out of the factory, where it is processed and cooked during the canning process. People who lack cooking time and are lovers of tuna can easily buy canned tuna and consume it while still raw.

Yes, you can eat tuna out of the can. Tuna is cooked before canning, making it ready for consumption without any further preparation.

Packed tuna is healthy to consume. Tuna contains vitamins and minerals that are vital to our body’s development.

Q. What does tuna have in it?

Tuna is among the healthiest and safest marine kinds of seafood. It has essential minerals and nutrients. Tuna is also a great source of omega 3 fatty acids.

Q. Is it safe to eat canned tuna every day?

From the above discussion, the bottom line is, if you had any query regarding how to eat tuna, this article has elaborated the various ways. You now know how much tuna you can eat, the health benefits of tuna, and their side effects.